O'Dell's Denver Thunder is our exciting new chocolate boy. He came from Kansas, and we are very thankful to have him! He carries the long coat gene, which makes the pups have very thick coats, and this will improve the coats on any dilute pups he produces also. He does not carry yellow, and does carry the dilute gene, and is clear for all diseases through the Embark panel. His OFA preliminary results for hips are good, normal elbows, and has certificates for normal shoulders, patellas, basic cardiac and full dentition. He is a half sister to another pup we got in Kansas, Peighton. We used his dad with our girl Winchester, and we will be keeping 2 of those pups for our program. His grandsire Nash, is the dad of Hayleigh, and her full sister Morrie that we purchased last summer. So you can see we are just a little in love with these lines!!

Daxx's Dino is chocolate, has OFA good hips, normal elbows and patellas. He lives in his guardian home nearby. He is a son of Sadie Grace and Jacob, so he was born here!  Dino's genetic testing just came back. He is clear for all 160+ conditions tested by Embark. He does not carry yellow, but does carry dilute. Dino's Embark Panel results (right click on link to open in new window). Dino went to his first show and earned his championship conformation title!

Elijah is the perfect mix of English looks and American talent! And throw in the disposition that made Labs the most popular breed on the planet, and you have near perfection in a boy! Elijah is the son of Josiah and Kizzy. He has extensive hunt training, and an amazing off switch. Elijah is a PRA carrier, so he will never be affected, but is clear by parentage for everything else. He has OFA good hips and normal elbows. He does not carry yellow, so none of his pups will be yellow. We went ahead and ran Eli's own Embark panel, which confirms what we knew: he carries PRA. His results: Elijah's Embark Panel   (right click on link and open in new window). Elijah is available for outside stud service. Cost is $1500, and negative brucellosis test along with proof of vaccination is required. 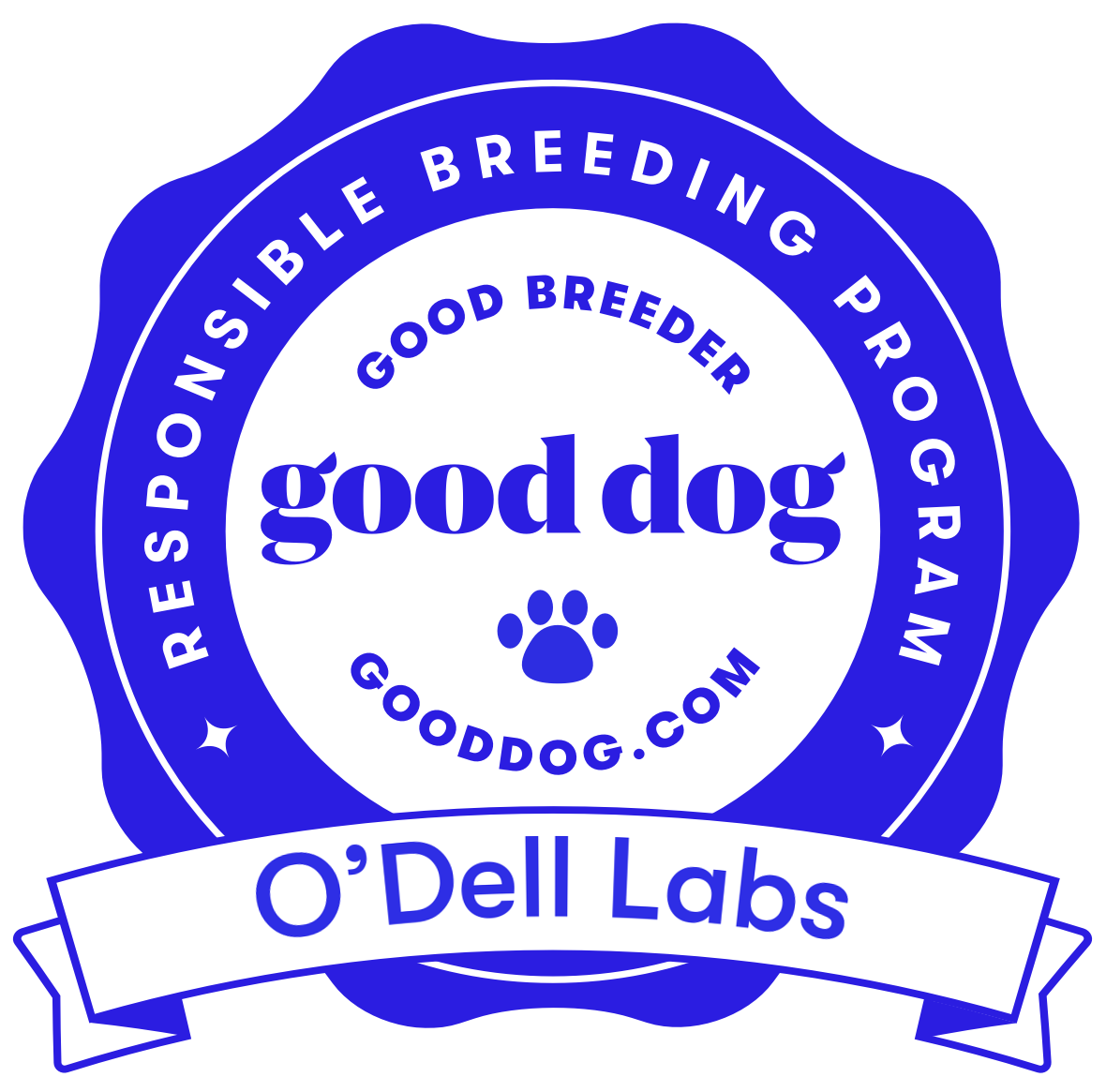 Welcome, Johnny Cash is Singing at Silvermist!!! Cash comes to us from the Silvermist family in Willow Springs. Cash is the son of a stud I have long admired, and his mother is from the famous Lavish lines from California. Cash is full of titled dogs, AKC and UKC show champions, his dad has 2 Rally titles, and we are thrilled to have him here! He is the English type of Lab, carries chocolate, yellow, and dilute and we couldn't be happier with the way his babies are looking and acting.  His final OFA hip rating is EXCELLENT, normal elbows, normal patellas, full dentition. He's clear by parentage for all the diseases Labs carry, but we sent his Embark panel in as well, and he is indeed clear for everything. His results are here: Cash's Embark Panel

O'Dell's Daniel is handsome chocolate sire, from Logan's Dan and Logan's Sadie. He is clear by parentage for everything we've tested for. He's had some obedience training. His coat color is EebbDD, meaning he carries yellow, but not the dilute color gene. He does carry the splash gene for tan points (Ky). He has been paired with many of our young girls, and his pups are as awesome as we hoped!!!  Daniel's OFA x-rays are done, and he has Good hips, normal elbows and patellas, and full dentition! He weighs 90 lbs. Daniel went to his first show and earned his championship title!! We are so proud to have our first champion boy!! We have 5 of his daughters in guardian homes, and one here with us, as well as his full sister, so that should tell you how very much we love this boy!  Daniel is clear by parentage for all the diseases known to be in Labradors, but we also ran his own testing through Embark, and of course he is clear there, too. Here are his results: Daniel's Embark panel  (right click on the link to open in new window)

Daniel is available to outside females for stud service for $1500. Stud fee is required at service (puppy birth guarantee or return service), and negative brucellosis test and proof of vaccination is required. STUD SERVICE CONTRACT

O'Dell's Shane is our handsome 2018 yellow boy, with all English bloodlines. He is a grandson of our house baby, Lily, and we are excited to see how he pairs with our girls. He is eeBbDD so can produce yellow, black and chocolate. He does carry EIC, but is clear for everything else, and none of his pups can ever be affected since the girls he will be paired with are clear. His mom has OFA excellent hips, normal elbows and patellas, and his dad has OFA good hips. Shane's OFA hips are good! Also, normal patellas, full dentition, normal shoulders, normal basic cardiac, and normal thyroid panel. Shane is available to purchase. His purchase price is $2500. He grew up as a house dog, and would love to be inside, but loves being outside, too. He also can be neutered, and then his price would be $1000.

I went on a search for a chocolate with really good hips in his lineage and a blocky head. Definitely found both with this guy! He will be forever missed. His sire, a gorgeous charcoal, was the top Labrador tested through the PennHip method, at the time he was tested. Josiah sired blocky pups, with tons of intelligence and drive. He is OFA good hips, normal elbows, normal patellas, and EIC, CNM, DM, RD/OSD1, Nasal Hyperkeratosis, Hyperuricosuria, and Cystinuria clear. Josiah was a carrier of PRA, but all our girls are clear, so no pups will ever be affected by this eye disease. We now have kept four of Josiah's daughters, all who have been paired with Jacob already for outstanding chocolate or chocolate and black litters. Josiah has a daughter we sold that earned her AKC Junior Hunter title, another that we recently kept who has earned her UKC Started Hunting Retriever title, and many others who are fantastic duck dogs. Josiah left us in August 2019.  His fun personality and amazing qualities will carry on through his son Elijah, and granddaughters Loni, Sophie, Winchester, and grandsons Dino and Shane.

Pictured at the top and below is O'Dell's Gold Nugget, call name Champ. Champ was with us for several years and gave us many wonderful babies in all three colors. Champ has gone to live at another breeder's home to improve her breeding program. We have three granddaughters--Sadie Grace, Calypso, and Coco--who are in our program, so his influence and wonderful qualities still belong to us. Champ has OFA good hips, normal elbows, and is EIC clear. 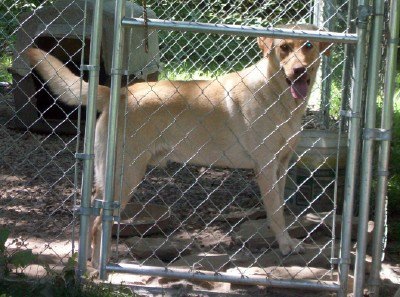 Now gone to his new home in MInnesota! AKC Liberty of Maker's Acres was added  to increase some awesome full English lines to our group! He does not carry chocolate so will only throw black and yellow . He is an EIC carrier, so can never be paired with another carrier. He's huge, coming to us at 104 lbs. He's been on a diet, so he's lost a little bit, and as sweet as he can be. His first litters with Daisy, yellows and blacks have been awesome. OFA Good hips, Clear for PRA, DM, CNM, RD/OSD.Big blocky pups!!! We kept one of his most recent sons, Shane, with Daisy, and we are thrilled to have Liberty's bloodlines to carry on!

This is Logan's Dan.  He is yellow, born 2009, but throws chocolate and black, along with yellow, with Sadie.This gorgeous boy is the result of my constant looking and researching online, seeing what others are selling, making sure we are competitive, and on the lookout for good deals for our breeding program. I found this boy, a chocolate female, and 3 of their pups from a lady in southern MO who was getting out of breeding.He has several champions in his extended pedigree, and when you keep clicking on the far right in his pedigree on huntinglabpedigree.com you will eventually get to the original Labradors which began in Newfoundland in the 1880s. He has a very sweet nature, and is throwing outstanding pups.  He is OFA good hips and EIC, CNM, DM, Nasal Hyperkeratosis, Hyperuricosuria, Cystinuria, Retinal dysplasia/Oculoskeletal dysplasia 1, and PRA clear. His coat color is eeBbDD. Dan has moved to Illinois to better another person's breeding program, but his influence stays with us through his gorgeous son, Daniel!

This is O'Dell's Jacob. He is a 2011 silver factor chocolate, that we owned until August 2017. We purchased him and his littermate sister, Kizzy. Their sire is a huge silver boy who came from West Virginia. Jacob was paired with Josiah's daughters, but now is going to help someone else improve their silver lines. We have a young boy, Dino who is in his guardian home nearby from Sadie Grace's litter with Jacob and we kept Peyton's daughter, Sophie, and our charcoal stud Elijah is out of Kizzy, as well in order to hold on to these lines. Jacob has OFA good hips, normal elbows, normal patellas, and is EIC, CNM, DM, Nasal Hyperkeratosis, Hyperuricosuria, Cystinuria, Retinal dysplasia/Oculoskeletal dysplasia 1, and PRA clear. Jacob weighs about 80 lbs. He has a beautiful huge head, but is leggy like the American style of Labrador.